Weiss-Aug's medical-device and pharmaceutical-industry customers look to the firm to develop new methods to help speed their time to market. And, at the same time the firm must stamp parts to machined tolerances. Aiding it in its mission to quicken its pace of prototyping and product development: a pair of 60-ton servomechanical presses.

When we last toured the East Hanover, NJ. metal forming operations of Weiss-Aug Co., in mid-2021, we noted how impressed we were with the high volume of tiny, intricate and yet incredibly critical medical parts it produces. Learning how it manufactures components for the world's leading medical/surgical equipment manufacturers and pharmaceutical companies, and preparing to celebrate its 50th anniversary in 2022, we gained insight into how the company also had recently invested in press technology to take on larger med­ical parts, as well as earn new work for the automotive industry.

However, make no mistake-small, precise and intricate stamping lies at the heart of Weiss-Aug and the firm continues to invest in state-of-the-art manufacturing technology that allows it to remain a leader in this field. That follows the philosophy explained to me by Dieter Weissenrieder, Weiss-Aug co-founder/CEO:

"I believe that we're much better served as a company and as a reliable partner by adhering to the philosophy: Don't fight the equipment-invest in the newest and best equipment and if you have to fight something, fight the tooling."

In its efforts to remain a leader in providing intricate, precision-stamped medical/surgical parts and assemblies, the firm has invested mightily in its prototyping operations, to enhance its flexibility and to decrease turnaround times for customers. Those investments include a state-of-the-art laser lab for developing custom sheet metal blanks, a robust metrology lab and two 60-ton servo presses-Komatsu HIF-60 mod­els equipped with a host of features that make the presses a perfect fit for Weiss-Aug's work. Again, this builds off of Weissenrieder's philosophy.

"Our medical-device and pharma­ceutical-industry customers look to us to develop new methods to help speed their time to market, and to provide product development and prototyp­ing," he told me. "That requires us to operate, as I like to say, hanging over the edge a little bit. We push ourselves to take on new challenges and grow the company in ways that most other metal stamping companies would not, but that's what has led to our growth and success for the last 50 years, and what will keep it going."

The State of the Surgical Instrument Market

Manufacturing surgical instruments requires the constant development of new products that add function during surgeries, but also products that sur­geons will find easy to use. Weiss-Aug customers in this arena want to present to surgeons new prototype products for feasibility testing, and then be able to react quickly to feedback from the field in order to efficiently iterate new design features. Suppliers then need the prototyping tools in place to pro­vide quick turnaround of engineering change orders.

That serves as the perfect backdrop to the evolution of the Weiss-Aug Sur­gical Products division's prototyping department, which took a giant leap forward in 2018 when it acquired the first of its two Komatsu servo presses. 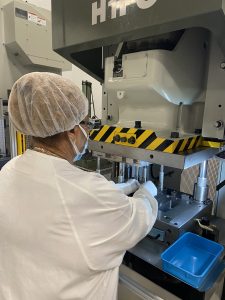 "In 2018 we embarked on a mission to address a growing need of our cus­tomers, to reduce time to market with their new instruments," explains Bill Verwys, director of advanced product quality and modular stamping for the Weiss-Aug Surgical Products division. 'That led us to invest in our prototyp­ing capabilities, so that we could react more quickly to new product designs, and to engineering changes."

Previously the firm would use sin­gle-hit and hand-staged tooling to pro­duce prototypes, and then fabricate full progressive dies for its high-speed production presses (mainly Bruderer models) to support prototype development. However, Verwys and his team knew that the unique capabilities of servomechanical presses could speed development time, while adding process flexibility.

Small Servomechanical Presses at the Heart of Rapid Prototyping

"The move to servo was not cus­tomer-driven," Verwys continues. "It was engineering-driven internally. We knew that servo presses had the capa­bilities to help us accomplish certain tasks used in developing prototypes. For example-the general concept of the prototyping that we sought to address, to quicken time to market for our customers, was based on stage­form tooling. When we brought our first servo press into the Surgical Prod­ucts division, we developed a modular tooling platform that allows us to sep­arate a progressive tool into several individual stations. This setup, along with the ability of the servo press to provide a specified tonnage anywhere in the stroke and at any press speed, lets us isolate key process variables during development."

In a normal stamping progression during the development of a new sur­gical instrument, the typical operations include coining, forming and blanking (beyond the initial laser blanking oper­ation). Using its modular tooling plat­form on the servo press allows Verwys and his engineering team to perform each of these metal forming processes independently, so that they can isolate the variables.

"The engineers that we work with across all of the programs, but specif­ically in medical, constantly look to tweak and adjust the design of their parts and assemblies-maybe making the part longer, shorter or a different shape," Verwys says. "This platform allows us to make those changes very efficiently because we can isolate the individual adjustments as needed."

Before, to make a change in a blank in a progressive die, the prototyping team often would need to adjust several die stations. Much of that time-con­suming work now is eliminated, starting with blanking, thanks to the company's laser lab.

''AB fast as we can adjust the CAD file, we can cut a new blank," Verwys says. "That's one of the keys to unlocking development time and helping us streamline time to market. We can run a job on the prototype platform using as many as four die stations, and stamp as many as a few thousand parts/week, or just a few, depending on how many the customer needs for surgical trials. While we're doing all of that, and getting our customers through early develop­ment, we can start building a progressive die to prepare for a production launch."

Depending on part complexity, Verwys and his team often can deliver a surgical part in as little as 8 to 10 weeks, compared to 16-20 weeks on a full progressive die.

"We brought these technologies together-press and tool, and laser blanking-to deliver a prototype part that has the same fidelity of a prog-­die stamped part, but within a much shorter timeframe," explains executive vice president Weissenrieder-Bennis. "The customer then takes these prototype parts and runs surgical trials, and they can be confident that the results they experience with the prototype instruments will mirror those they'll see with a production tool made here in a progressive die."

In 2018 when Verwys and his team began investigating servo presses on the market, they started by looking at a 35-ton model-more than enough tonnage to form the 0.010 to 0.025-in.­thick stainless-steel sheet (300 and 400 series, as well as l 7-7PH) they typically stamp. But to gain a larger press bed, they opted for the Komatsu HlF-60, a 60-ton press with a 35.4 by 21.7-in. bol­ster, 4.7-in. stroke and 11.8-in. shut height. It added a second identical press in 2019 when one of its prototype jobs immediately moved to production and the shop needed a second press.

Eventually that job moved to a pro­gressive die, so now Verwys and his team divide the prototype work between its two servo presses.

"From a prototyping standpoint," Verwys explains, "the ability to adjust the ram speed and position on the fly is huge. We manually can drive the press down using the jog wheel at a very slow speed while reading full tonnage. I can set the press height and drive down until I get the tonnage I am looking for, then read the press height, adjust the height by some amount so I can get to 180 deg., then automatically run from there. And, we're constantly changing the press speed, from jogging down at 10 or 20 percent, all the way to 50 or 60 percent; we rarely run at full speed (85 strokes/min.). We're almost always monitoring and watching what's going on with the material at a very slow speed."

Verwys also points out that com­pared to a conventional mechanical press, he has not had to shim the punches in the servo presses at all since they've been in operation. "That makes a big difference from a prototyping standpoint," he says. ''And, we have the IO-position programmable option —another plus when it comes to prototyping as we can develop a complete press cycle and store the parameters for as many as 10 preset process steps." Verwys also speaks to the need for precision with the press, as his allow­able tolerances rarely exceed ±0.005 in.

Precision, Repeatability a Must

"If the press wasn't repeatable, we couldn't do what we're doing," he says, "which keeps us in the good graces of our customers. We've run thousands of parts in some cases for customers, and we have an extensive metrology lab here that will let us know if we're drifting out of tolerance. But we constantly check the parts coming off of the servo presses and they prove themselves on a regular basis."

What makes these presses so accurate and repeatable? Per Komatsu specs, the presses feature a rigid toggle linkage combined with standard AC servo technology, along with dual timing belts constantly monitored electronically for motion and breakage, isolating the servomotor from direct load and shock. A linear glass scale mounted to the press frame monitors slide position and ensures repeatable die-height consistency at the bottom of the stroke. And, a plunger guide system absorbs thrust load from the eccentric motion and prevents side load on the gibs.

"I laugh," Verwys says, "as there only are three decimal places on the linear glass scale, but we regularly run the presses to a fourth decimal place, using our other measurement methods to dial it in. We find the press controls very easy to use. We're engineers, not press operators, but we have no trouble dialing the press in."